Commish Message Hide
Apr 11: This one came down to the final week and Hugegolfhacker wins! He scored 11 in the final week while his closest competition, Ditka and Eugenius "only" scored 10 to fall into 2nd place, tied with goflames who also got 11 last Saturday. Great finish to the pool and congrats Huge! I will contact you to get a t-shirt out to you soon. Everyone thanks for playing and enjoy the playoffs! Show More
- - -
Apr 1: I am seriously doing terrible in hockey pick'em right now but props to my Mom who, tied with Hugegolfhacker, won the week with 9 correct and both 1 goal away on the tie-breaker. Overall we have a three-way tie for first Ditka, Eugenius and Hugegolfhacker each with 34 followed closely by a pair with 33. Only one week to go in this pool to decide it. If we have an overall tie then I will do a random draw for the t-shirt. In case you didn't notice yet, Hockey Playoffs pools are already up.
- - -
Mar 26: Oh man, how did I only get 4 right?!? I go away for a week and I am totally out of touch with the NHL who's hot, who's not, apparently. Enough about me - three way tie for first! cneilson, Ditka and goflames all scored 9 of 12 and were even on the tie-breaker, all picking 6 goals. On the overall board, goflames pulled into 1st place at 29, followed by Eugenius at 28, binionben at 27 and Ditka at 26. It's close, folks! Two weeks to go. Don't forget to make your picks on the upcoming long Easter weekend.
- - -
Mar 19: I was away on vacation last week so missed the update after week two in this pool. Belated props to Eugenius who scored 8 of 11 and won a tie-breaker over binionben and goflames. You guys know you can go back and look at prior week results, right? On the overall standings click the table headings to go to each specific week, like last week.

As for this past Saturday, 7 of 10 was the high score by Jeep Patriot, goflames and Jack59, with the J.P. winning the tie-breaker. That is back-to-back tie-break losses for goflames. That sucks, but probably not as much as actually picking the Leafs over your Habs! ;)

Overall Eugenius and goflames are tops at 20, followed by binionben with 19, Jack59 and yours truly with 18.
- - -
Mar 5: The tie-breaker solved, well not nothing but we still had a tie. Eugenius and IceBurn win the week, edging out my Mom and Hugegolfhacker on the tie-breaker. Only 8 games on the schedule and best we could muster was 6 right. Rangers with an upset. Weird to say but Black Hawks with an upset. A lot of Leafs love, and I know they've been very good, but in Washington outdoor game that wasn't happening. And the all-white look? Yikes! That was terrible.
- - - 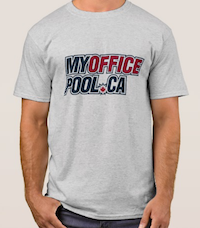 Last two hockey pools for the season before the NHL Playoffs! This one, pick'em, and the other one, survivor. This one is very straight forward. Pick the winners from the Saturday schedule plus guess total goals for the late game as a tie-breaker.

Free entry. Limit 1 entry per member. There are six Saturdays left in the NHL regular season. Most points after that is crowned our Pick'em III champ.

Prizes are bragging rights plus an official MOP t-shirt to the overall winner. Join any time, and good luck!