Commish Message Hide
Jan 1: We finished off 2017 with a lot of favourites winning between the Saturday and Sunday schedule. scooby10672 and myself tied for top spot for the week and identical tie-breaker at 5 goals.

This pool is now over so the results page defaults to the overall standings where I earned the trophy - thank you, thank you. More a function of never missing a week as opposed to hockey prognostication skills. binionben was right on my tail for 2nd followed by scooby 3rd, cneilson 4th and 1960yankees 5th. Thanks for playing everyone! I will start up a new hockey pick'em pool this week! Show More
- - -
Dec 28: The days truly slip away over the holidays, but finally recapping last week, binionben scored 13 of 15 picks right to win the week in a landslide, a full 2 points ahead of his next closest competition. He is now only one away from me for the overall title with just one week to go. We will start fresh in the New Year. Good luck Saturday, except binionben!
- - -
Dec 18: A true tie between cneilson and scooby10672 for the week, both with 8 right and the same tie-breaker at the popular prediction of 5 goals. Two weeks to go and I've got a slim 3 point lead on cneilson, 4 point lead on binionben.
- - -
Dec 11: cneilson and binionben are catching me on the overall board. They tied for the weekly title with cneilson winning the tie-breaker by a goal. binionben was one of only two to pick the Maple Leafs over the Penguins. I was asleep at the wheel midday Saturday and missed picking the Blues game. A few weeks left and we will start fresh in the New Year.
- - -
Dec 6: Pretty funny we all picked 4-6 goals for the late game tie breaker and 12 goals were scored! The tie breaker did come into play as I took the weekly title over binionben. A lot of Maple Leafs love, and a lot of red x's as a result.
- - -
Nov 27: cneilson wins the week! He scores 9 edging out scooby10672, Benjamin and yours truly. But I still had enough for the overall lead through November at 56 points... and also thankful to some missed weeks by a couple of you as opposed to my superior hockey prognostication skills. Anyway, as mentioned way back in October the Tim Horton's cards were up for grabs to the overall leader at this time! Ignoring me, we have a three-way tie between cneilson, Ditka and 1960yankees. There were 7 packs of cards, so lets say 2 each, shall we? One for me... hopefully a Crosby signed card or whatever the giveaway was. I will email each of you shortly for your address. Lets continue on with this one through December and then we will open a new hockey pick'em pool in the New Year.
- - -
Nov 21: Congrats Ditka on the weekly win with 10 right! And what happened with our overall leader cneilson? Didn't get his picks in and falls to 5th. I think he was too distracted trying to win his football survivor pool. Only one more week to decide the winner of the Tim's cards. Hope I can pull it out. Its been tough not opening sitting on my office desk all this time.
- - -
Nov 14: Ten of 12 right for GoRedWings in his first week in the pool! Damn that is pretty good. And almost everyone got the Islanders-Blues game wrong. A couple got 9 and a handful with 8. cneilson still holds down the overall lead with 44 but three are 3 behind. Only two weeks left in November to decide who gets the Tim Horton's hockey cards!
- - -
Nov 7: Another tough week! Our top pick'em players hit 7 of 13 right, which (silver lining time) is a nice reminder to not bet on the NHL. Congrats Iceburn winning the week just edging out cneilson on the tie-breaker in a low scoring Ducks-Sharks game. cneilson is in the first overall. You know what? I think I will make this pool stop at Dec. 30 and start a new one in the New Year so we can all start fresh at that time. Yep, that is what we'll do, or something like that. I will think about it.
- - -
Oct 31: Realize I am a little late with the commentary on this one but it was another rough week. Somehow Ditka wins the week two clear of second with 9, and CelticRules finishes second with 7 - and both missed picking the early game, Sharks over Sabres! Picking hockey games is certainly humbling, but it makes for close overall standings. cneilson and Hugegolfhacker are now tied for 1st, I've got 3rd currently, and only 6 points separate 1st through 8th. Keep picking every week! I still have the Tim Horton's cards looking for a good home.
- - -
Oct 22: Ouch, terrible week! Only 5 for me and no one really stood out with a high score of 7 for Hugegolfhacker who wins the week. A handful of the biggest favourites - Bruins, Capitals, Flames - all lost. At least this just cost us a point in the standings. The survivor pools took a beating. The overall standings are very tight. cneilson is in 1st with 25 points, Hugegolfhacker with 24 and three members tied with 23.
- - -
Oct 16: binionben wins the week with 11 right! Lyonshark was second with 10, although didn't fill in the tie-breaker box, and cneilson was one of two entries with 9 (IceBurn the other) but didn't make a pick for the Islanders-Sharks game. Make sure you fill in the whole form everyone! I am going to add a pick form validator to the website, so that should help. I am up to 14 packs of Tim Horton's hockey cards to split between this pool and the hockey survivor pool.
- - - 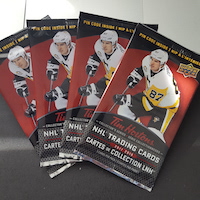 Oct 10: CelticRules wins the first week with 11, and hey, I didn't do too bad either at 10 along with cneilson and Hugegolfhacker (great name - aren't we all?). Nice to see everyone is all-in on the Leafs, and they are living up to it with now a 3-0 start. That was certainly a barn burner on Saturday. On the flip side most were on the wrong side picking Ottawa, Edmonton and San Jose to win. I am thinking about allowing half goals for the tie-breaker. I will update the pick form if I make that change.

Hey, anyone is welcome to join my private hockey survivor pool that starts Oct. 14th, $22 entry.
- - -
Oct 2: Per our member newsletter, the top entry in this pool through the end of November wins Tim Horton's hockey cards! Purchased during my daily Iced Capp run. - - -
NHL is back so lets fire up a pick'em pool! Hey, but we aren't picking the winner of every game - lets be reasonable. Instead check in once a week to pick the winner of every game on the Saturday schedule. Make sure to fill in the total goals tie-breaker for the late game. The weekly pick deadline is 7:00pm Eastern on Saturdays, but for any games played earlier the pick for those must be in before opening puck drop.

This is our free entry public hockey pick'em pool which is open to all members. Join any time including after the season starts. We will track weekly and overall winners, for bragging rights only, of course. Enjoy! Cheers, Mike